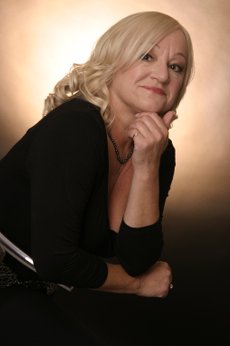 or come and visit me on my Facebook page

A Londoner by birth, I moved with my family to the coast of Dorset in my early teens where I was fortunate enough to attend the local grammar school.  By the time I hit forty, I was divorced with four children to support and found myself having to employ my fortunately good secretarial qualifications to keep our bodies and souls together.

Moving from being a legal secretary to a school administrator to an office manager to various roles in the aerospace industry with a few other temporary jobs on the way, my working life has, I now realise, furnished me with loads of useful copy.

With the incredibly generous backing of the local engineering firm where I worked at the time, who allowed me to juggle my hours to fit in frenzied trips to the university campus for lectures and seminars, I undertook a full-time BA (Hons) degree in English Literature at university for which I received 1% below a First.   I then decided that the only course of action was to carry on and study for a Masters in Literature, Landscape and the Environment … which I passed with Merit.   I have the hood to prove it!  The PhD may well still happen – who knows!

I’ve been singing, dancing and acting on the stage and anywhere else I can, since the age of six when I sang my first solo.   I achieved a reasonable standard in ballet and could tap dance, though I didn’t enjoy that nearly as much as the more graceful forms of dance.  Over the years, I have written a pantomime, acted in plays, held down principle roles in Gilbert & Sullivan operettas and various musicals, entertained audiences of Rotarians and Masons with my fishnet-clad legs, and successfully rendered some seriously difficult classical music.  I still perform occasionally when my arm can be twisted hard enough.

I hold a long service medal (30 years) from the National Operatic and Dramatic Association, achieved distinction in grade 7 Musical Theatre and have sung some wonderful music with several choirs.  During my time with a professional-standard, amateur operatic society, I not only regularly sang solos but was also rated as the dresser you really want if you have a quick change – I can rip a man’s trousers off in no time flat … in the nicest possible way.

When performing became non-viable for health reasons and not being adept at doing nothing, I looked around for something to do with my spare time.  Seeing writing as a fantastically convenient outlet for my intellectual creativity, I was surprised when my friends and family not only read my scribblings but demanded more.  Always happy to oblige, I have kept on writing.

Then, on yet another level,

I’m a practising Christian (hope to get it right one of these days, but God is very patient), a keen gardener, a good cook, an absolutely omnivorous reader (though more selective nowadays as a result of my university studies) and a totally unlikely granny - regularly having trouble convincing people I am as ancient as I am.    After retirement, I moved to live on a little Greek island in the Aegean for several years though I am now resident in the UK.

One last note ... As Patricia Main (my academic manifestation) I not only edit texts for publication but also delve into research and have produced several monographs:

Isabella Whitney: A Truly Modern Woman – the inspiring and never before told life story together with an evaluation of the writings of the first woman to make a living from writing secular poetry in 16th Century London – also reckoned to be a major contender for the title of the ‘Judith Shakespeare’ posited by Virginia Woolf.   Paperback available on Amazon.com.

John Moore Chronicler of Country Life – a monograph on the writer and broadcaster John Moore of Tewkesbury available on Academia.com

An Ordinary Type of Bloke – the memoir of his experiences in the trenches of the First World War as narrated by William Leaver, a London lad.  Available on Academia.com

Building a Church for Bussage – This traces the effect the collapse of the weaving industry in 19th century Gloucestershire had on a small rural population and how St Michael and All Angels’ Church, Bussage, Gloucestershire subsequently came into being.   The book includes detailed information drawn from original documents relating to parish life and the people of the village at the turn of the 19th century.  Available on Amazon as a paperback.

If you have a text  (fiction or fact e.g. a memoir)

you want produced in book form and require

an editor , let me know.